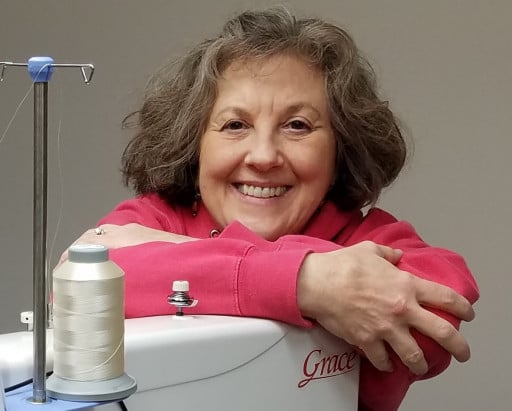 I grew up in western TN where as a teenager, my mom tricked me into learning how to sew! She said if I would make my own clothes, she would provide patterns & fabric; otherwise, I would have to get a job after school. My tomboy self wanted those daylight hours to ride my horse so I learned to sew in Home Ec. Quilting was *not* on my radar! After college, I started working for the US Postal Service, which moved me to Atlanta GA in 1984. I met Doug at church where we married in 2000. When we said "I do" we had no idea how God would change our lives through quilting! Several years into our marriage, I learned how to quilt at a local church offering lessons. I was major hooked! Fabric Café became my favorite booth at the Atlanta Quilt Show. I started working in their booth and also became their quilt pattern proofreader. I was asked to work at the Paducah show and then the big one. Houston! It was there on Sunday afternoon when Doug & I went to the Grace booth and Nathan offered us a package deal too good to refuse! We bought a Q'nique 14+ that I named Esther after my grandmother who was a quilter. When Doug got ready to put the Continuum frame together, I asked him to please make a video for "all the single ladies" because I knew how challenging being a single female could be. We had no idea this was the start of a YouTube channel with over 1,000 followers! One year later, again at the Houston show, I bought QCT4 Beginnings. Again, Doug made a video showing installing the hardware and software. I quickly realized there were no videos on YouTube to help me learn how to use my software, so I started making videos.
Today finds me the proud owner of a Q'nique 21 Pro and in awe of the many quilting friends I have made literally around the world through using QCT. I am so grateful to the Grace Company for making quilting affordable. I am truly living Grace's dream!

Follow this ambassador online on their social media channels: